Radio Free Deimos is a fan-created podcast broadcasting from Deimos, Mars’s tiny little moon paradise. Through the magic of Transcendent Technology’s new podcasting suite we’re able to transmit from 2750 to look at Hc Svnt Dracones news and product in the early 21st century, from a moon that may or may not exist. Don’t ask, we’ve learned not to question TTI software. We aim for two episodes a month, but “month” is a nebulous concept.

You can find us on Itunes, Stitcher, and Google Play.

Ashtaar escaped his backstory in a tiny little ASR corptown to bigger and brighter vistas and the glittering cultural centers of Mars. Why he’s hanging out on this rock is a mystery to me. He may be slumming. 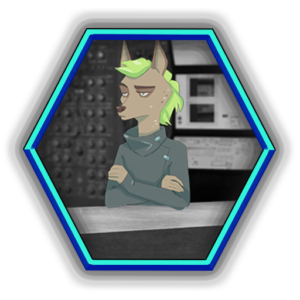 Originally from Venus’s Kafka-Six colony, a MarsCo refugee camp for victims of the 20th Century Literature Degree Fad of 2754. Later Corbeau discovered the joy of blogging, and currently produces content for Furry Fiesta, The International Anthropomorphic Research Project, the Austin Furry Community, and more. He’s also ADHD, if you can’t tell. Say “hi” to him on FA. 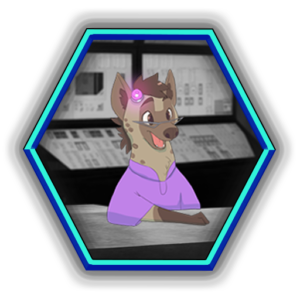 Whines hails from seen-better-days Izwe Station orbiting 4 Vesta, owned by the hyena matriarchs of Izwecorp (best known for cheap free-range meat, we understand there is no freer range than ‘orbital’ and the cows have as much space as the ranchers; pushy matriarchs; a faulty life support system that struggles to keep up with the demands of indoor cattle-ranching.) In his spare time, he dabbles in graphic work, costuming, dance lighting, and reading F/SF literature.

We’re occasionally visited by Nixxian, a Sneppard from the neighboring moon/criminal underworld of Phobos, when the two moons are in perihelion. Our staff artist is Ashley, you can find her work on FurAffinity.

Ashtaar, Whines, and Corbeau share a gaming table and a love for the furry fandom. Corbeau used to write the “Furstarter” furry crowdfunding podcast, and stumbled Hc Svnt Dracones when he saw the game on kickstarter. It’s a fun game with some good ideas, and Corb wanted to get involved and help expand the HSD universe. Thus, the podcast!