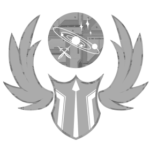 The Sol system has long been governed by an awkward series of gentledog’s arrangements between powerful corpornations, sprawling empires that don’t see eye to eye on all (most, any) issues and frequently compete with each other. As trade increased between Venus, Mars, and the Jovian colonies, so did piracy, and no one corporation could control it…particularly if they were secretly backing the pirates.

IRPF met the challenge, building relatively safe tradelanes between the worlds of Sol. As they expanded their fleet and their presence, IRPF was contracted to enforce the rules of the megacorps within their own corptowns.

IRPF is unique in not having their own corptowns. They abide by and enforce the rules of the local corps, adapting their own guidelines to suit local regulations. Having a corporate ruleset that requires flexibility and compromise can, occasionally, lead to large, armed, arguments over what IRPF’s rules actually are.

Point of note: While IRPF has authority over most of Sol, it’s difficult to enforce that authority outside the boundaries of megacorp-controlled space, and the Inner Ring Police Force has no authority in Spyglass territory.