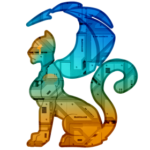 At least one major ancient Terran religion called their god by the simple name, “I Am.”

MarsCo’s corporate slogan, “MarsCo: We Are” could be truly a statement of hubris on an epic level, save that MarsCo has, for over 700 years, been the backbone of Vector society. Some of their main products are the Geomats (a 3D printer that, with little exaggeration, prints societies); public education; the “BlueSky” space stations, so large they have atmospheres. Their name is deeply connected to Mars itself. MarsCo created the Vector race. It’s pervasive, vaster and more complex than any Terran empire. The other MegaCorps are leaner, more specialized, lighter and more responsive. At some point in its past, MarsCo evolved beyond the need to compete. It simply is, and is very good at that.

That being said, it’s not an organization with a lot of specialization. And MarsCo is spread so broadly that an org chart is meaningless. It hires out agents, subcontracts to free agents, and purchases and spins off minicorps regularly. While MarsCo rule ends at the edges of its corptown, its influence reaches wherever vectors set foot.