Deimos! If your home was a dusty rock with no atmosphere, it’d be just like home!

Show notes coming soon, it’s been a few months so I’m just wanting to get some content up right this second 🙂

The RFD hosts return from a two-month antivacation filled with opinions!


♃ 3.39 — Questions and opinions! Today’s question is from Athlon, who brought up the question of “How can my tabletop characters sell loot?” Ashtaar and Corbeau go in different directions on this one. Ashtaar stacks the deck against PCs selling most common loot. Corbeau sides with the PCs here, GMs need a variety of ways of distributing loots and he really wants there to be an alternative maker culture, but it seems like we agree there’s better ways of making money. Being a heavily consumer economy that leans heavily on economic churn, the world disincentivizes a second-hand market, but in some places or circumstances where it’s hard to buy new stuff, small sellers’ markets could erupt.


♃ 8.02 — D&D4E (which all of us had a great time playing for several years, thanks) has some economic laws that come close to the light speed constant in terms of being unbreakable. It gets a LITTLE friendlier later in the series, during the “4.5” of D&D Essentials, but fundamentally, you can sell a magic item for 1/5 its value, or break it down to material components worth 1/5 its value. Any attempt to make a profit selling stuff in 4E without actually being a store—do you want to be a store?—are fundamentally doomed. Later you can get ultra-rare items that you can sell for half their value, but the game really works to make PC item creation fundamentally unprofitable…it’s not really the point of the game.


♃ 9.08 — Whines thinks he’s referencing the short story “Queen of Angles,” but I’ll be darned if I can find this one online…


♃ 13.13 — How likely any random item is to be licensed for individual use is a contentious topic at our table. On one extreme, any given device could be password protected, toggle-locked, proximity-enabled, or whatever, or melt into biogoop after a week (if you’re not a long-time player, HSD has disposable cars that biodegrade after a few days, they’re kind of a running joke in our campaign.) We don’t know what the other extreme is, but presumably a version of HSD exists where the majority of goods last until they break, and durability is a valuable trait. The actual world is probably in the middle somewhere.


♃ 23.40 — The low bar of “just surviving” in HSD is pretty low. In most major corptowns, there’s always a dole of soylent available, generally places to crash…it’s a very squatter-friendly setting. Since most vectors continually generate a tiny trickle of revenue because of their Ledger financial trading ticking away, even your cousin Ernie is worth slightly more to the corporate overlords alive than dead. Is this a Utopia or Dystopia? We’re not sure.


♃ 27.59 — Corbeau here, I had the pleasure of working behind the scenes on an episode of Antiques Road Show. This sort of thing happened several times, I don’t know if it made the episode, probably not—someone brought in something a BIT unusual, like a Dr. Pepper sign with an unusual layout, two ladies instead of one, and the appraisers couldn’t price it, there was nothing to compare it to. It happened with some other strange stuff, like an unusual piece of tribe art, but it was particularly striking with a pop-culture sign. That’s all. Story over.


♃ 28.36 — It occurs to me that in a solar system with an internet connection, finding a buyer for an obscure bit of something random is going to be easier. It’s the internet times four planets and a deeply engaged population. But this conversation was already running kind of long, something to think about for later.


♃ 37.37 — Here’s the moment in Sev’s tabletop playtest that set me off on paroxysms of doughnut brainstorming. I’m easily amused. – Corbeau


♃ 40.08 — Thank you, Kaelgren! We have our first listener-submitted segment! Planetary rotation and some thoughts on chronology. As I say later, this is partially in response to Kalegren and Corbeau working on a joint “History of the Universe” project.


♃ 42.55 — Ashtaar ruins people’s fun…build and manage your own space missions with Kerbal Space Program; NASA has a few resources, including the Planetary Orbit Simulator (I’m not sure if this works?) The Outer Planets is also a neat visualizer but it doesn’t have a date/timestamp. NASA will show any number of angles or configurations or points of view on their Solar System Simulator but it’s rather graphically static. The Sky Live may be the best from a “pop science” perspective, but is there a zoom function? And Solar System Scope, which is a Flash app, has my personal seal of approval because it has Ceres and a nice graphical look, and lots of major comets too. Take it to “realistic” mode in settings to get it the actual system scale. You can even see little moons spinning! Aww! Lookitdat moon.


♃ 44.06 — The Speed of Plot: I think I did the math about 6 months ago on this one and am seriously misremembering this one in the podcast.

What is the speed of plot? In HSD travel time between any two planets on a chartered flight takes 2-3 weeks…a good solid game time unit of measurement. Common sense says a Venus to Mars transit would be the low end of that timetable, and a non-orbital asteroid belt station (say…Ceres?) to Jupiter at aphelion would be the high end. Of the former, “speed of plot” for a 125 million mile journey over two weeks would be 372,023 MPH. Of the latter, 898 million miles over three weeks, 1,781,746 MPH. The speed of light is 670,616,629 MPH, so the speed of plot is between .06% and .3% of the speed of light. The low end is about ten times faster than anything attempted today; the latter? Not possible, yet, although there’s some theoretical nano-probes in design that may be able to get to 20% of light speed! At .3% we’re just starting to get into relativistic velocity. A traveler from Ceres to Jupiter visiting her twin would find her sister a staggering 9 seconds older… It’s unlikely that’s even a single gray hairs’ difference.

♃ 46.20 — Apparently it takes about 40 days at the absolute fastest and more like 6 months at a reasonable speed to get to Mars. If you don’t know what the Hohmann Transfer Orbit is, sit back and read yourself a thing (Or just believe me when I say that it involves leaving Earth orbit at Martian aphelion and landing at Perihelion, drifting between the orbits of Earth and Mars as if Earth lazily let go of a balloon while running in a circle. This is the most efficient route, but not necessarily the fastest.


♃ 47.50 — Faster than Light travel is, it seems, one of the known unknowns in Hc Svnt Dracones. Unless you’re a hardcore realist, I think every sci-fi fan would assume that we’d have figured out a way past the light speed barrier within the next 500 years or so, but not the Vectors…although they do have a very broken and uncontrollable jumpgate technology that nobody’s returned from yet, the HSD universe doesn’t have FTL or warp drive. Is it impossible? Do the Powers that Be stop vectors from developing this technology? Do people return from a warp drive experience changed, or do they “Transcend?” We’ll never know. At least until such time as the lorebook comes out, and then we still probably won’t know.


♃ 48.09 — What’s new from HSD! The latest BIG announcement has been the table of contents from the Lorebook, which can be found on Tumblr.


♃ 1.00.01 — Coming soon from Radio Free Deimos! I’ve been working on a series of posts looking at Sammi and Sev’s ongoing HSD playtest session. Years in a penal colony for 20th century literature students have convinced me that it’s impossible for anything to be too derivative. Our friends at The Hyena Sanctuary of North America have tentatively agreed to play guest hosts for an on-location episode, and GM and freelance TRPG writer Mark Carroll will be working with us on hot zones and urban conflict. Fun fun! 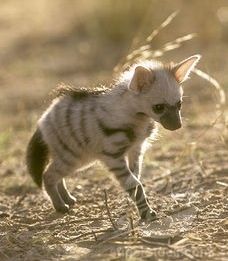 Baby aardwolves are pretty cute. This picture lifted from Aardwolf is Cute on the Boredom Therapy blog.

♃ 1.02.04 — Important stuff, the host’s ongoing HSD campaign gets off to a rocky restart after Whines’ and Corbeau’s hiatus. More talk about economies, Ashtaar leans away from Utopian assumptions in favor of player abuse.


♃ 1.12.23 — Things that have brightened the hosts’ weeks. Whines talks a bit about baby aardwolves. Ashtaar talks again about SpaceX launch successes (I think the other hosts aren’t as into this segment as Corbeau is…) and Corbeau talks about 3D-printing a building and Astronomy Cast’s recent series on launching animals into space for reasons that don’t seem really solid…see episodes 445 (bugs), 446 (birds and small critters), and 447 (Dogs, monkeys, and other mammals that are big enough to have personality) Lots of sad stories out there! On a not unrelated note, a few Christmases ago our staff artist Ashley surprised us with this very pretty picture called “moon dogs,” with two of the hosts under a sparkling sky dominated by Laika. I’ll put a small version of that one at left below. 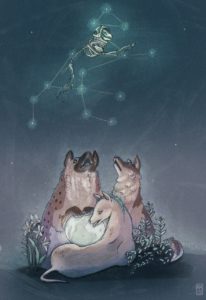