Deimos! Come here for the memories. We don’t have many other options, although we’re opening a bowling alley.

Episode 19, host chatter! This week, Ashtaar, Whines, and Corbeau talk about the Kickstarter, the HSD fan creativity contest, attempt (and fail) to build a set of robot arms, celebrate their first year, discuss plot debt vs. personal debt, and talk space pickles. All that and more!

Show notes coming soon! The kickstarter hit so suddenly that I’m gonna get the next episode ready to go ASAP… in the meantime, here’s the HSD Lorebook Kickstarter, now past goal!

(15 second pause at beginning of episode, will fix soon!)

Technical issues for the week, a lot of minor errors coming from recording in “stereo” instead of “mono.” We’ll solve that one…

♃ 00.50 — Hello from the hosts! What’d you do during the Doughnut Beast vs. Starbarks breakfast wars?


♃ 02.00 — Want information on the fan-creativity-mini contest? Check it out on Tumblr. The Sound and Silence kickstarter, as of this moment $4000 over goal, is, well, on Kickstarter.


♃ 04.40 — Links to the Hc Svnt Dracones discord server here! The latest information without all that pesky temporal paradox nonsense we get when we try to update information from 703 AE.


♃ 05.25 — Happy birthday to us! So far as “small updates” go, we’ve touched up the HSD Timeline and cleaned up the fan-submitted library a bit (some day we’ll get submissions…) There’s not a lot of competition in furry podcasting space, any reviews or “likes” help–you can find us on twitter, facebook, Google Play, and ITunes! Thank you for any positive energy beamed our way 🙂


♃ 06.14 — Questions and Opinions! This week in Discord MetroFallout was building a new piece of equipment, a set of robot arms. The hosts unhelpfully dissect the idea. Our center point was ultimately that it’s hard to gauge the cost and character point value of an item without knowing how it’s going to be implemented and used. Is it just going to be a skill bonus to Science and Athletics? An extra load-bearing appendage to add to your weight bonus, or to wield another weapon? Extra attacks in combat? That kind of creates a continuum from “minor benefit” to “the most powerful add-on in most gaming systems.” The important thing is the results, not the thing. This probably isn’t the direction MetroFallout wanted us to go… 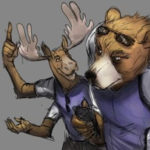 Moose with Four Arms by RedDyeNo5, full image on Furaffinity

♃ 10.50 — Zarpaulus, who really knows HSD inside and out, points out that there IS a surgery that provides extra arms, it’s “Augmentation,” HSD1.0p.204. It does, in my defense, cost ₢200. Frustratingly, the game mechanic is “functions as normal arms do,” so there’s not really much to go on. Given that in HSD surgeries often let vectors push the boundaries of normal biology, it might be simplest to assume the surgery: Augmentation (Extra Arms) is a doorway to raising Body:Strength or Body:Dexterity up to 4, but not up to 5. Muscular Enhancement, the usual stat-raising surgery, is ₢1500, but if it didn’t “stack” with this Augmentation, the threat of losing the 200 credits down the road might make up for the lower initial cost. Once again, thanks Zarpaulus! Major fact check there, kind of embarrassing…


♃ 15.30 — Getting the last word in because I can, I’m not entirely sure why Ashtaar was pushing so hard for the Crafting rule, except that it is a way for the rules to address “new” stuff. It’s hard to imagine how to integrate the crafting rules for your own body, particularly since an arm isn’t an original concept. I suspect that if we’d remembered the “Augmentation” surgery that Zarp pointed out we wouldn’t have gone down this road. That said, a character that’s very interested in recrafting his own body or making disturbing new body modifications may have fun here. I’m going to see if we need to have an episode just focusing on the craft rules…


♃ 25.30 — beginning a long, winding conversation about our weekend HSD games. To frame the conversation, the party, the minicorp “Revelations” dedicated to providing free-ish educational stuff (kind of like Progenitus took over the medical world), recently started working with Progenitus as journalists/free agents. Our most recent assignment was to go to a moonlet near Saturn to see what happened to a scientist who vanished some years ago. We’re a little unclear on the fine details, but it appears that he’s set up a somewhat Star Trekkian wish-fulfillment alternate reality bubble, and we’d like to escape from it now, thanks. All the characters seem to be in the alternate reality in rejuvenated bodies, Ashtaar’s holding his cards close on this, but the ASR team member’s implants and various piercings are gone, and the ship’s AI is manifesting as a fox. We’ll see what happens next!


♃ 25.38 — If you’ve never seen them, the three “Gamers” movies by Zombie Orpheus are pretty amazing. The first is a short film about a party of fairly typical gamers going on a fairly typical dungeon crawl, it’s mostly a “hah hah wouldn’t this be funny if it happened like that in real life?” bit. The second (“Dorkness Rising“) is a full-length movie that only kind of references the short…a munchkin party deals with the introduction of a Real Roleplayer, and the GM learns to tell actual stories. Movie three isn’t quite as much fun as the first, but it has its moments. With the success of the GM as an author, work and life and relationship difficulties interfering, the players haven’t been able to wrap up their epic saga, so they try to go to GenCon to make time to wrap the story up. Predictably, it doesn’t work. It’s got a heavy collectible card game plot, thus the title “Hands of Fate.” Fun bit, this was filmed at the one GenCon Whines and I were able to attend! We’re not in any of the shots, but we saw some of the sold-out events on the schedule.


♃ 27.52 — The general technique of using between-session communications is called “Bluebooking.” Here’s a nice little article from Gnomestew on how it can add to your campaign.


♃ 31.00 — A winding aside here about non-cash rewards, goodwill as opposed to strict numbers, and other fuzzy payouts. Not entirely sure we reached a conclusion.


♃ 36.30 — Ashtaar’s treated our party’s minicorp like its own character, a technique the FATE RPG works with heavily. It’s got its own allegiance levels, which modify the party’s ability to make contracts, but don’t quite stack with the characters’ levels. Our AI has started making its own transactions, so effectively the corporation has its own ledger score too…but we paid for this by giving up one dot from either Community or Economy at character creation.


♃ 37.50 — I wanted to say that a study group wouldn’t be a corporation, but there’s a suggestion in the color text that a marriage is an incorporated group, so…who knows? Around here we begin a discussion of “plot debt” (a long-term challenge to the party) and “personal debt.” 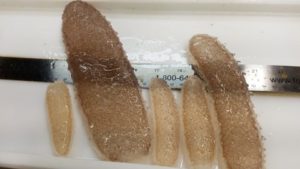 ♃ 49.00 — Experience the thrill that is Sea Pickles, and the edutainment short about an island covered in three feet of foam!