Summary: Like it says on the box, Chessboxing combines chess…and boxing.

Originally created by a Dutch performance artist, Iepe Rubingh, but has since grown into a competitive sport.

In the comic “Froid Equateur” opponents fight each other for a full round of boxing before sitting down to chess. The comic may have a high furry interest, as it seems to have sentient animals and anthro characters, besides being very stylish. 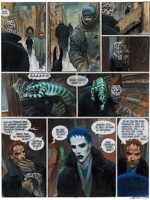 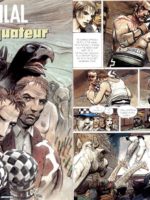 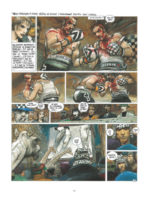 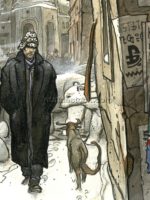 The idea has cropped up elsewhere, but it didn’t become formalized until 2004 when the Berlin Chess Boxing Club was founded.

Rules/Play: 11 rounds, six of chess and five of boxing. A single chess game is played over the six chess rounds, three rounds of eighteen minutes. This is “blitz chess,” in that the players are encouraged to make their moves quickly.

Each boxing round is also three minutes, with a brief one-minute break between rounds.

Weight classes are set in a manner similar to boxing. Victory can be gained by knockout, technical knockout, checkmate, going over 9 minutes total by the chess game’s time control mechanic (or by a referee call), or resignation. A player can’t stall out the chess match.

Notes: Slightly more complex than simply throwing the sports together, the rushed chess adds an element of action and excitement. The game requires the player to switch between intense physical and mental activity, and as the opponents start to wear out the switch becomes harder, and one suspects the chess game becomes a little more scattered as players try to think through the moves without the help of the timer.

In HSD it seems like the huge diversity of player physical bodies would make setting up any kind of Chessboxing league challenging. However, the idea of a slightly large board for micros, so that they compete physically and then lug the pieces around, is charming. As I write this my dogs are fighting/wrestling, which is why this paragraph is even here. Maybe the lateral league has more wrestling, less pugilism?