Summary:A strange little trampoline-battle game from the village that wants to break your mind. 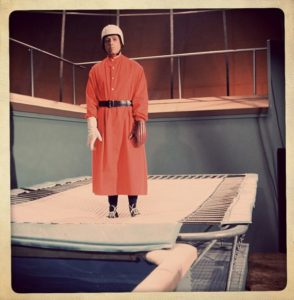 Uniforms/Equipment: Long red cossack-style robes with black trim, crash helmets, one boxing or catcher’s glove (right hand) and one padded glove (left hand). Lace-up shoes. Court is made of two standard rectangular trampolines 8 by 12 feet long, separated by a small pool or dunking tank perhaps four feet wide. A slanted ledge with railing runs along both sides, allowing players to run around the periphery of the court. Both trampolines and dunking tank are on raised pedestals, adding an extra two feet of height to the whole arrangement.

Rules/Play: Opponents bounce around and between trampolines or run around the ledge and railing, attempting to dunk each other into the small pool. Injuries are common. A certain amount of faux-Japanese ceremony surrounds the sport, opponents bow before beginning a duel.

Other Notes: “The Prisoner” is a classic 1960s series focusing on alienation, brainwashing, and the creation of a deliberately surreal environment in an attempt to break the prisoner’s will. At least that’s one interpretation, it’s a strange series with a lot of angles. Kosho clashes together formal Japanese martial trappings with a deliberately absurd look and feel (silly uniforms, grown men bouncing around on trampolines…). It’s a dangerous sport, deliberately made moreso by raising the playing field…as if trampolines surrounding a bathtub wasn’t already an invitation to head injury.

Kosho is one part in a massive brainwashing and gaslighting campaign. It’s deliberately Dada (an art movement based solidly on nonsense). Its creation is a deliberate weirding of the program’s setting, moreso because it’s a commonplace, everyday activity. It might work well as a part of an engineered world or a sustained effort to tear individuality away from a population…as a well-placed reference if nothing else.

More at David Stimpson’s blog, or on Deletionpedia.