We take a break from Spyglass to talk about very, very large buildings.

Audio seems to be better. Corbeau is an english major and really “Better” shouldn’t be expected of him.

♃ 0.01.45— This week’s topic is HSD architecture, which really ended up being a discussion about megastructures, with a very brief aside on ship construction.

♃ 0.02.19— NUMBERS. I had a career in sales forecasting for a while, it may show. Assuming that each megastructure can hold about 500,000 people on average (sort of canon), an average corptown is 23 square miles (canon, they’re “the size of manhattan”), megastructures are roughly as population-dense as Terra’s biggest apartment blocks, Mars’s population is 5 billion (canon), 90% of the population lives in corptowns and of those, 80% live in megastructures (based more or less on population distribution in Japan), that there’s about 200 corptowns on Mars (my biggest unfounded assumption), we end up with about 50 megastructures per corptown. Math!

♃ 0.09.00— Megastructures are towers the size of cities, but they’re not just that. They’re really self-contained worlds. Vectors don’t tend to travel much, MarsCo and ASR both seem to discourage it (either by subtle societal control or by making technology that brings the world closer to you. A given megastructure should have as much personality and self-identity as a small town. My home town of Austin prides itself on being weird and quirky as hell, with a strong music scene, hike and bike/greenery, and a great party district. It’s a tech hub, but a community too. At a population of 900,000, it would fill two megastructures. How much of that town’s identity would reasonably be packed into the megastructure, as opposed to the remaining, say, 3/4 of the corptown? We could certainly have two levels dominated by a party district, a research/liberal arts college made of a slender stack of linked levels on the north side of the building (along with its support structure), a rooftop auditorium that broadcasts live music once a week. Maybe the city’s rich green backdrop would be better suited to the landscape around the towers, but there might be an intentional effort to include a green core in the building, each residential level built around a central park five stories high, each centered around a well-groomed tree that provides climbing and perching opportunities and an abundance of picnic sites. There’s a large number of ASR-linked tech companies scattered throughout, but they’ve been encouraged to build in a way that matches the local natural vibe, their levels have elements of parks and greenery incorporated as well. And all of them are patched into a community round table ongoing discussion through something like a local access TV channel/dedicated social media channel, and there’s a stronger sense of “the corps are listening” here than in other areas. They’ve also learned that supporting the local artists and weirdos is good publicity, and artists and eccentrics…even outright lunatics…are subsidized as local mascots, as long as it tells a good story. Could all that fit into a 1.5-mile-high building?

♃ 0.13.15— On Skybridges: This idea is carried over in 2.0 from 1.0. In 1.0 it’s something like a penthouse level, luxurious but terrifying in its height, lost in the clouds. I’d argue that the “cloud” angle probably isn’t that terrible, as the Martian atmosphere is about twice the height and scale of Terra’s because of Mars’s low gravity. This zone seems like it may be used for high-class corporate HQs with their own dedicated air shuttles, celebrities and CEOs, and the handful of avians that can afford to live there. The feeling from 1.0 is that this zone is expensive and status-priced, but not that popular as a residential zone because of the height and vertigo, which makes it a better status symbol than actual home level. The fantastic view can be duplicated with holos and screens, and likely is not worth the pricetag.

♃ 0.23.45— Another way to distinguish a particular megastructure: who owns it? A single mid-sized corporation and its subsidiaries could easily own half or all of a megastructure, that city being its headquarters, workforce, and expression of its brand. What kind of world would a high-end clothing manufacturer or Starbarks create for itself? Smaller corps have more freedom to specialize than larger ones, so this might add a lot of character to the local terrain.

♃ 0.26.38— The hosts briefly reflect on having a few levels of your megastructure set aside for micros and laterals, and that this would be extremely cute. We also talk about how the way the megacorps flavor their buildings.

♃ 0.31.02— I know we’re going to talk about this next month when we discuss Progenitus, but the description of Progenitus’s architecture in Sound and Silence alludes to something that isn’t officially recognized anywhere else: a real slum. Apparently a lot of people fall between the cracks in Progenitus’s weirdly communist world, and they have to live somewhere…More on that in a few weeks.

♃ 0.32.30— A brief aside on ship architecture, I thought this would be more rich.

♃ 0.38.12— A long review with videos of “I Love You Colonel Sanders” is over here, it’s a nicely comprehensive review if quite negative. I thought it was pretty cute, but it’s a deep review so I’ll link there. There’s a corgie in there somewhere too.

Edit – in late December Pierce shared a couple of work-in-progress images of a megastructure, this one’s a smaller one, a half-mile tall. Yay visual references! 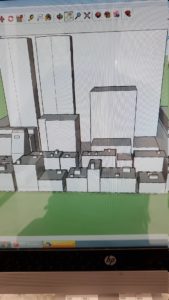 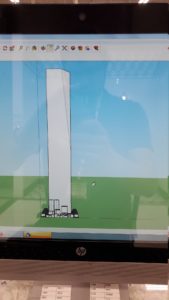