Episode 2: A Whirlwind Tour of Sol

Greetings from Deimos: come for the view, leave because of the low escape velocity.

We start talking about installing a cog as our ship AI, and then wander all over the solar system. And then we get to our topic. 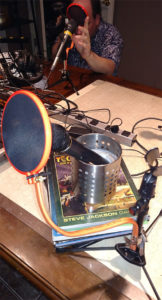 On the subject of technical difficulties! Last episode, Whines was a little muffled, his mike was the weakest of the group. This time we had a wireless for a replacement, but it was just a bit too big for the stand! Here’s the makeshift mike stand…pop-filter, stainless steel can, and four inches of GURPS books.

Finally, Corbeau gets to use his GURPS books.

Next time…next time we’ll do better. Corbeau’s sound is a little bit fuzzy. Also, his grasp of the “record” button is a little fuzzy, and half the episode is a redo…

LOTS of opinions this time around as we go on a very deep ramble on Cogs and their souls, and territory the books do not cover…


♃ 03:34—Another look at at the HSD miniatures  Kickstarter, past its goal! Here’s the trophy wall of heads on Tumblr.


♃ 04:38—Questions and Opinions—can a COG be a ship’s onboard intelligence? (Thank you, NekojiruSou!)


♃ 09:02—Corbeau’s probably the only one who doesn’t know who Edi from Mass Effect is.


♃ 25:30—”I Give you a Hamburger.” (Can’t seem to find the original animation of this sound clip…if there was an original…)


♃ 28:20—Actually, Traveller is the RPG in which character death can occur before the game begins…


♃ 29:39—Corbeau on Eros, the metal-rich asteroid that really should be a brothel.


♃ 43:19—Corbeau will eventually turn any RPG conversation to Planescape.


♃ 53:18—Whines and Corbeau really like Werner Vinge’s “Fire Upon the Deep” and the Tines