Three towers in the northwest wall of the deserted corptown Lianthe in Bastion, Mars’s southern plains

Titan Films always turn a profit, because they’re so damned cheap. They’re a great place to sell vid footage or for next year’s media sensation to get their foot in the door. Titan respects people who are resourceful and prepared, so bringing a roll of breath mints and something from Vanestia’s “Torrid Nights” line of products is a good way to win points at the casting. Pro Tip: no-one has ever successfully blackmailed @ThatsPierce!2232. Many have tried, but his reputation is so caked with muck now that throwing anything at it just adds to its bulk. 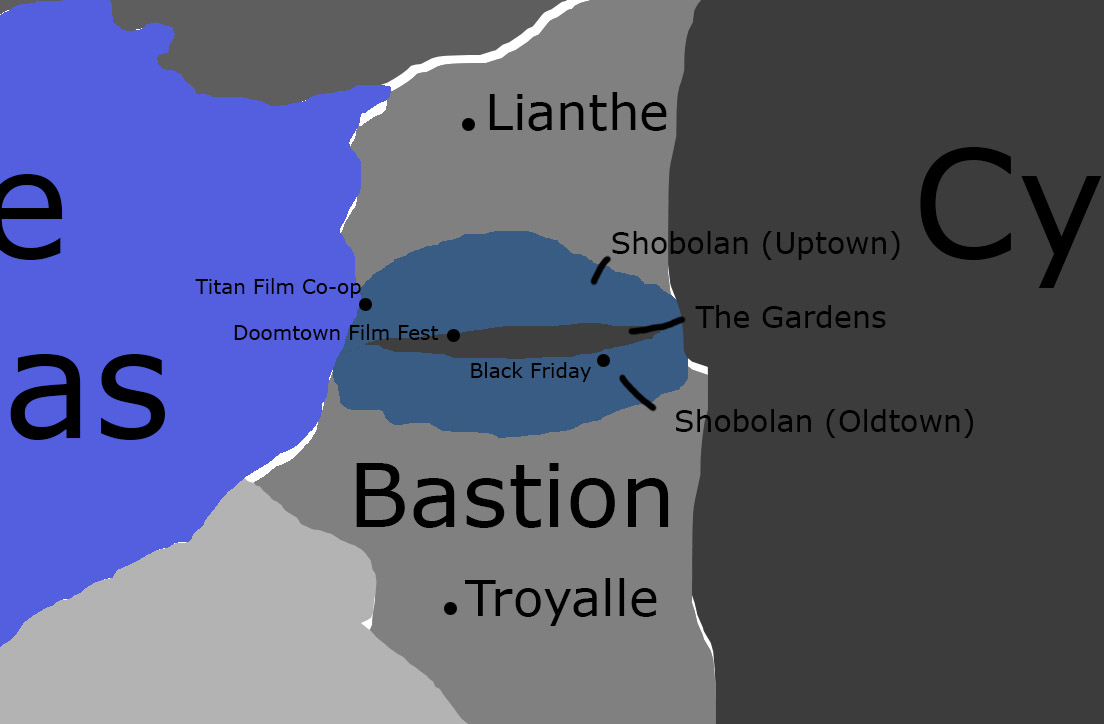 A mixed bag of Marsco and Pulse media producers keep a summer office in a cluster of ivory towers overlooking Lake Hallas in the cold southern plains of Mars. Look for the three white towers covered in movie promotions, flickering holo screens, and inches of graffiti wherever anyone can possibly climb or perch with a spray can of paint.

Titan operates out of Sholoban, an ancient corptown in the Bastion region abandoned by its creators some 300 years ago. The local area has some fantastic resources for a film creator on a budget: a vast lake, plenty of outdoor monuments, a jungle filled with overgrown plants and strange architecture, ancient wreckages and plenty of salvage material, and a pool of extras that work cheap. So many jungle adventures and post-apocalypse films have been filmed in Bastion that some of the quirky local features have bled into popular culture, particularly the odd color coding of the city. “Primitive jungle tribe,” for instance, has become so firmly associated with cats, black tile and basalt, and feline mosaics and statues that anything else just doesn’t look like a primitive jungle tribe anymore. If Felidae could speak on the subject, they probably wouldn’t mind being typecast in revealing animal skins in steamy jungle romances. Any publicity is good publicity.

Titan films are cheap and sleazy, pandering to the lowest common denominator. They’ve got a reputation for exploiting the locals, who’ll sometimes work for food or the sheds and trailers left on set or the chance to rub elbows with celebrities. The rumors that Titan actually encourages violence and bloodshed at their auditions are probably just rumors, and the entertainment world says that the infamous casting couch videos from the last years are fakes…even if Titan Films mogul @ThatsPeirce!2232 posted them to his own social media account. And their movies aren’t “good” and certainly aren’t “art,” but many of them are bad enough that they start to approach art from the other side.

On the other hand, the local economy might tank without them. For some of the locals, particularly the laterals, working for Titan may be the only work they get in a year, and their cast-off equipment and sets are useful supplies and building material. Their presence literally helps keep the lights on, as MarsCo leaves at least a portion of the service grid online for their film team and what they’ve been told is a 5,000-employee crew. They also encourage and support indie film creators, loaning equipment and resources…but any real talent they work with doesn’t stay “indie” for long.

Titan Films provides a legitimate service, even if their output is bottom of the figurative barrel. They have all the resources of a mid-sized MarsCo media production team, and will make them available for a modest percentage of a film’s profits. It looks like a scam, and certainly everything about @ThatsPierce!2232 looks like a scam artist. But they’re in it for the long haul, each picture bringing in a surge of credits, then a long tail of trickle revenue, and it adds up.

If the party needs a platform to get some information into the world, Titan Films can fill any skill or equipment vacuum they face, but the more they borrow the more involved Pierce will be in their project, pushing his favorite actors and actresses into lead roles, “suggesting” rewrites to the script to drop in product placements or more sex and skin. The studio’s always desperate for more and better equipment, their camera drones tend to suffer from amateur handlers, lateral attacks, and explosions that weren’t quite where they were in the script.

Lots of mid-level celebrities began their careers as actors in Titan films. For a complete sleezeball, @ThatsPierce!2232 has a huge amount of pull in the Pulse/MarsCo media world. He may not be able to get Big M to underwrite his epic space western, but he can open a back door to any production in Sol. Only Progenitus and TTI have standing rules against working with former Titan Films actors, to protect their reputation and secrets.

As a playable corporation, Titan Films is a Pulse subsidiary, four or five layers removed. Sleazy though he is, @ThatsPierce!2232 caught the Pulse vision. Anyone can be a star, even if the big studios don’t recognize them, and one of the reasons Pierce is in the game is to make sure his stars have a chance to shine. They can’t compete unless they can get into the arena.

At the Guide’s discretion, Titan Films characters can select a Boon in Communication (for “the talent”) or Operate (for “the crew.”) Faults in Protocol and Logic are both distressingly common.

♃ Lights, Camera, Tentacles: Titan is lukewarm on an idea that the party’s proposing, until they learn that one or more of the characters ties to TTI. Then the party’s got more attention than they could possibly want. Titan has an entire trilogy of space wizard films waiting for someone with the right Transcendent implant, and would love to get some footage from inside a bioship.


♃ Cut…CUT!!: The local branch of Spyglass has a long-standing policy of supporting all of Titan’s projects, and has a few staffers planted in Titan’s offices. They’ve never tried to pull any leverage on Pierce, who has no secrets and certainly no shame, and any attempt to twist the arm of one of his staffers or actors would ruin the game for them. But once in a while Spyglass will drop a script into the slushpile. The threat of airing someone’s dirty laundry on screens across Solnet as a steamy action/romance espionage flick is usually enough to get some credits and influence. The party’s called in by a representative of one of MarsCo’s shadowy board members, who’s…distressed…about a movie in production, a sexy psychological thriller about a low-level executive’s climb to power and the bodies left in her wake. She wants a way to take the film off next year’s release schedule without acknowledging Spyglass’s dirt. Maybe the PCs can help.