The Joiner court can be thrown together in about 15 minutes by anyone who’s done it before. While back-yard Joiner courts are purpose-built, old hands at the game insist that the real thing has sway and give and lean that a custom set-up just can’t replicate. The real thing is pricey for home use, but if your supervisor looks the other way, “free” for anyone with access to corporate write-off supplies. 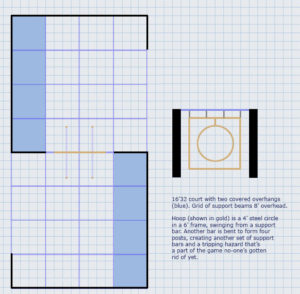 Two MarsCo RuBox units are set up to form a large “S” shaped unit, all right angles, with an additional four-foot overhang over the inside of the curves of the S, and an additional four-foot wall segment at a right angle inward from the points of the S—kind of like a decorative serif on the letter. An eight-foot chunk of the middle section is missing, replaced with a four-foot hoop inside a six-foot square, hanging from the supporting framework of the RuBox by four regulation hooks. A massive double “U” shape hangs over the hoop, making two metal poles about three feet apart on either side of the hoop (and creating a tripping hazard that’s just part of the game now). These two shapes are made from pre-keyed hardwire. The entire structure is prefabricated and slap-together, but so standardized that it’s instantly recognizable wherever IRPF has set up camp.

One team or the other throws the ball (a soft but springy exercise ball seven inches wide) through the hoop, starting the game. Players can bounce the ball off the ground, walls, or each other in an attempt to get the ball through the hoop. Holding the ball for up to a count of three is okay, but longer than that, or if whoever’s holding the ball takes more than a single step, and the ball reverts to the other team for a serve. The exception: anyone hanging from the smartwire or the structural bars of the RuBox can travel with the ball, though holding the ball can limit players’ mobility somewhat…unless they have extra arms, that is. Players with extra arms or prehensile tails get picked first. Contact with hands is generally discouraged, slapping the ball away is okay but actually grabbing it or pushing a player around is usually penalized somehow, either with points or a beer run.

There isn’t specifically a rule against meddling with the hoop itself, which swings freely from hooks at the top of the court. Swinging the hoop up to catch a ball usually gets some applause. Pushing the hoop away from an otherwise clean shot is playing dirty. Anyone spending serious time hanging from the hoop, particularly as a defensive play, usually wins an informal penalty, unless they’re a micro. Micros scrambling on the hoop is universally considered fair, but they do become a target.

And when IRPF picks up stakes and leaves a territory, they leave the courts behind until kids and time tear them down.

It’s an open question whether Joiner or the more technologically sophisticated Rebound came first, they’re definitely related. Rebound has a fair number of similarities to this game. Number of players and the size of the hoop, ball, and court are all pretty close together. You’ll sometimes hear die-hard players insisting that MarsCo took IRPF’s sport, gutted the spirit of it, and made it popular. The two games are played pretty evenly throughout Sol, but Rebound gets more media coverage.