Deimos is for families! There’s a Christmas ice skating party and sing-along on Lake Voltaire this weekend. Skating on frozen carbon dioxide is…breathtaking. So is the sing-along.

This week we dip into holidays, counterculture, festivals, and a wide, rambling arch of other topics, with guest hosts Victoria and Star!

An important and recurring point in this episode: There are really only two HSD books at this point, and they’re both very dense. We got a strong data-dump on culture and worldbuilding in HSD Extended, and the upcoming Lorebook looks like it’ll have lots more. In discussing the culture of the HSD world we hit a wall of “we just don’t know” quite regularly, but that’s not a fault of the existing books, which are pretty dense—it’s a relatively new game with a slow publication cycle.

♃ — Extensive samples this episode from the audio adaptation of the comic version of Santa Claus Conquers the Martians. With apologies for…everything.

♃ 04.01 — New content up on the website! Mentioned here and elsewhere, the Hc Svnt Dracones FAQ-style introduction, and “Tidings of Great Buy,” an essay on religion in Sol. Very work in progress with some technical hiccups and editing to work through, the Hc Svnt Dracones Holidays and Festivals almanac.

♃ 04.42 — Questions and Opinions. This week, Star and Victoria, both very new to HSD, ask some “intro to the universe” questions.

♃ 05.12 — Victoria asks about the motivation behind creating Hc Svnt Dracones. Pierce Fraser talks about this in a recent IRC livechat, the details are at The HardBoiled GMshoe’s blog entry, “Q&A Pierce Frasier (Hc Svnt Dracones),” along with more previews from HSD2.0. My thoughts on the interview here.

♃ 06.25 — The question of “how are PCs related to corporations” could be a topic on its own. Corporations are the backdrop of HSD, and for an adventuring party, a lightweight minicorp is a good way to define the party’s identity. How an individual and a corp interacts is more of a campaign style question, it seems like it’d be the “Big Brother” slider.

♃ 11.02 — Star accidentally misnames Ashtaar as “Antares.” Later, she told me that was the name of one of her favorite fish. I don’t think he’s ever been conflated with a fish before. Had to mention this.

♃ 11.02 — Family structure and minicorps here. Much of our information comes from the conversation between Elsie and the Monster on HSDEx1.0 p.172 and later. One of the perks of a high-paying corp job is a tech version of maternity–the first awkward year or so of childhood is handled by machines, forced growth, and braintapes, eliminating some of the hardest period of child-rearing and keeping a valuable employee in the office. Much of my feelings about the general breakdown of the family in HSD stem from this section. MegaCorp society may be Utopian, but even the original “Utopia” text by Thomas More had elements of dark parody (the natives use gold for their toilets, and the book itself begins with a dedication along the lines of “let this book be as gold to you…”) We’ll definitely be having an episode on HSD and the family.

♃ 14.30 — Whines talks about the Mutt Protocol, and I mention egg-laying foxes again. Vectors have a few dozen distinct species, and while any two vectors of the right gender can have a child, it’s going to be the species of one of the two parents. It may have some characteristics inherited from the other parent, but not to the extent of a mashup hybrid species. There is an option for that, the “Hybrid” morphism mutation, but those weird mixes make other vectors more than a bit uncomfortable, since something’s obviously broken!

♃ 17.25 — On to tonight’s topic: holidays and festivals! Mostly festivals, and a couple of long rambles on counter-cultures.

♃  20.00 — Mini-discussion on fashion and the fashion industry; judging a culture’s fashion by the military/shopboard standards; fashion as a yearly cycle.

♃  22.47 — Where is HSD’s counterculture? I really want to develop this as its own topic.

♃ 25.09 — Callout to Fear the Boot #360, that granddaddy of RPG podcasts’ episode focusing on holidays.

♃ 25.09 — Victoria opens up holidays as cultural/community policing. Santa’s “Be Good” carrot and Krampus’s literal “bad child” stick; Corbeau references the Book of Leviticus, where most of the “don’t do that’s” in the bible are located. Leviticus is a behavioral guide for the Levites on Saturday Night Live, a way of separating their culture from the decadent Romans and so forth. Also, , Putin gives Trump an Elf on the Shelf.

♃ 31.05 — David Sedaris explains the true meaning of Easter, elaborating in bad student French, “offering bits of information that would give the Pope an aneurysm.”

♃ 38.47 — Here I really wanted to drop a reference to the destruction of Constantinople, but thankfully that would have been too pointless an aside. The Renaissance was, in part, created by a massive influx of literature and science imported by academics fleeing the sacking of Constantinople in 1453. They grabbed as much as they could carry from Constantinople’s libraries…and soon, an interest in classical civilization spread across Europe. Good times. But the pattern of a cultural bottleneck and surge of information is an important one. In a sense, the HSD universe is the reverse, but we know that there was a great rush to move culture and supplies off of Terra when nuclear war started to loom as a certainty–this was the Hemivector Exodus. That’s an idea that’s almost worth unpacking on its own.

♃ 40.00 — Victoria talks about creating a pastiche culture or counterculture from elements of Old Earth taken out of context. Corbeau proposes the “Black Friday” holiday, a celebration of dead corporate mascots.

♃ 42:00 — The Inversion Holiday is a long, strongly medieval tradition: the feast of fools, king of the misrule, etc. A child would give the Sunday sermon, the manor lord would serve the servants, and so on. These were powerful escape valves. In the bible, the idea of “and the last shall come first” underpins the idea.

♃ 45.00 — In the dark future, a new breed of bounty hunters rises up to avenge the abuses of the corporations…a trailer for “Bounty Killer.”

♃ 51.00 — Temporary Autonomous Zone: A concept that’s embedded deeply into raver and festival culture, and informs Mardi Gras and the inversion holiday. And in a sense, the TAZ is the basis for most ritual. The TAZ is an area where the normal rules of the world are erased or changed, and a new set of rules are in place. In our community we have a hippy celebration called “Eeyore’s Birthday” in a large, downtown park area, where for a time the police gently ignore nudity and light drugs, a pretty concrete example of the concept.

♃ 52.12 — on “Hot Zones.” In an area where two corporate domains rub up against each other, you create an area of forced diplomacy and culture clash. When the corporations have a strong rivalry or tensions spike, a “hot zone” is created, and the local climate can run from chilly hostility to outright gang-type warfare depending on how the conflict plays out.

♃ 54.26 — Corbeau’s very interested in the Cog concept of a soul, and how that contrasts with the vector culture’s general denial of the concept of a soul. Also, when a Cog dies their spirits are transferred into a backup storage. I really don’t know if that’s a good or bad thing, but it’s the only mention of an afterlife in the game, so there.

♃ 59.00 — The hosts speculate on the sport of “curling” on Europa as a method of disposing of the dead. I suspect the local environmental protection group wouldn’t approve, but it’s how I want to be remembered.

♃ 59.26 — Star mentions “The 100” and their illustration of the space burial and returning to earth as a sparkling light. So pretty. 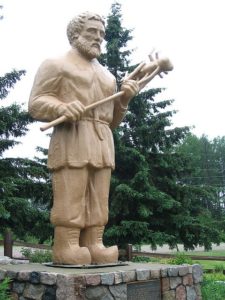 The Statue of St. Urho. I was wrong about this one, it’s from Finland, Minnesota, but it’s still a good story.

♃ 01.14.15 — Whines drops a reference to John Varley’s “Titan” series, a trilogy about a floating space station near Jupiter. The ideas in this series are fun and HSD-relevant, with a lot of genetic design and an arbitrary living god-ship.

♃ 01.15.12 — More about Potlatch, the root of the world “potluck.” Again, another festival with strong cultural policing elements.

♃ 01.17.19 — Star mentions Cú Chulainn and his conflicting geasae, a legend of social conformity and hospitality. Corbeau is uncomfortable with dog soup as a concept.

♃ 01.23.48 — Corbeau’s write-up of “Backdays,” a Venus celebration and gentle protest of the reversal of Venus’s rotation, and a reference drop to Nazi propaganda magnum opus “Triumph of the Will.”

♃ 01.25.36 Reference drop to the Hadaka Matsuri, or Naked Festival, and the Kanamara Penis Festival.

♃ 01.31.25 — Lots of references to groupthink and semi-spontaneous cultural movements tonight. One horrifying one is the strange fad for rectal fistulas kicked off by Louis XIV. Do not listen to this episode, it is a new form of horror.

♃ 01.32.14 — another horror, the Rat King. Also a very seasonal horror since the Rat King turns up in the Nutcracker Suite in a gentle way. Rat Kings are what happens when a nest of rats end up with their tails knotted together, sometimes through human intervention.

♃ 01.33.41 — Victoria mentioned owls and the regular hosts back away from her. Owls are one of HSD’s bogeys, a breed that was corrupted by outside influence and became monstrous, early in HSD history. The Avian family still hasn’t escaped this stain.

♃ 01.34.30 — Ooowooo! V-e-r-y little information on the Ducktails teaser that was released December 8. The video of the cast singing the DuckTales theme is a lot more fun! Also, Scrooge stepping out of the Tardis. Cute.

♃ 01.36.05 — More about Les Diableries! Wikipedia’s brief article on the medium; London Stereo’s featuer page on the art form, with lots of detailed pictures, including how they change completely when lit from behind; information about Brian May’s book, with some videos and the results of a diableries contest; a more detailed article from The Guardian on May and his collection. Corbeau namedropped Georges Melies, a master of early trick photography in video and the mysterious older character in “Hugo.” Here’s his fun film, “The Infernal Cakewalk.”

♃ 01.38.10 — Star recommended the “LifeAfter” podcast, which besides being darkly futuristic is on topic because it’s sponsored by General Electric. MegaCorps: circumscribing the future today! Corbeau briefly digresses on “The Orbiting Human Circus.”

With thanks to Sirius Beat for our intro music, “Future Club,” with additional samples from Weird Al’s “Christmas At Ground Zero” and “Hooray For Santa Claus.” Our fun, modular header art is by Absyfield (Thank you Ashley!)