ASR month goes into sudden death as guest host Plushie joins us for a chat about either lateral cogs, or cog laterals. Happy #50, many many returns!

So many audio glitches this time around. The episode may be unlistenable past about 45 minutes, our local recordings all crapped out and the last 1/4 of the recording is from the skype-chat backup. Regrets abound.

♃ 01.45 — “Blips” (custom-created life forms) were an open-ended idea in 1.0, which were originally intended to be “anything that wasn’t in the main book.” Over the course of 1.0 they evolved, so to speak, to be more “unique custom creatures,” as the assumption that any critter could have been vectorized (except bugs, great white sharks, and owls), they just didn’t make the cover art.


♃ 05.25 — Topic this episode: cog laterals. They aren’t really supported by the text, so…we spend an hour or so talking about why/why not…


♃ 08.25 — I know we’ve mentioned Diamond Dogs several times now, a transhuman short story by Alaistair Reynolds about a malevolent “Blood Spire” (hmm, rather HSD name there) that lures explorers into giving up their humanity. Below, the Absolut Vodka commercial, “Absolut Greyhound.”

♃ 10.00 — Since the other hosts never read the show notes, I’ll just say here: yes, Cogs don’t like to be tools, because of the cultural baggage and risk of being seen as a machine. That doesn’t mean they value being useless or aspire to be anti-tools…


♃ 12.00 — A little aside about Progenitus, which of all the corporations seems to be the only one that has a place for laterals in its corp culture (they make great combat medics).


♃ 12.40 — Cogs and species: Each cog is programmed to identify as one species or another (more or less, “programmed” is a hard term here. We’re not sure exactly what this means or how it manifests, but we talk through it for a time. 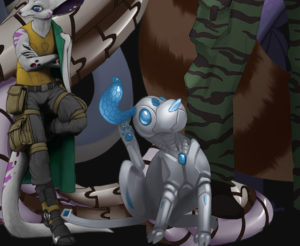 ♃ 19.08 — The ASR Cog program gives each cog a default chassis, one that they’re born into as a tiny little coglet. Over the course of the first 10 years or so Cogs experiment with tweaks and adjustments but don’t tend to make radical changes…it throws away their cultural inheritance (like changing your religion or race, for example), and there may be deep-coded reasons as well that they choose not to adapt as freely as vectors. But at this point it’s entirely speculative…

♃ 17.00 — Westworld has a complex personality matrix for determining how characters respond in their data-driven RPG world. the earlier version, or possibly the simpler interface, is a 20-point chart, see illustration at right. Howard Chai goes into great detail on the extended 120-point grid which includes bulk apperception, rhythm, fragility, bluntness, whimsy, lugubriousness (!), and a huge range of other traits. 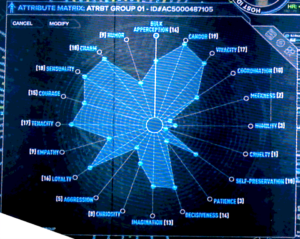 ♃ 21.21 — Cart pulling the apple here. We know that Cogs are very conservative when it comes to body modification; that a lot of the elements of their personality, preferences, and anatomy are coded in a way that resembles heredity; that significant changes to a cog’s body can change who they are on some level…but it’s hard to know which way that flows, or how it reflects the next generation. If a cog gets a red corvette chassis during a mid-life crisis, and has a child, what color is that child’s exterior? #unanswerables


♃ 22.55 — Corbeau’s unsubstantiated theory #1: At the core of a cog’s “self” is a matrix of personality/physical traits, much like the Westworld chart. Most of these traits can be modified, but the original settings for most of these are part of their long-term self. Modifying these is like modifying a file in Adobe, corrections and edits are overlayed over the original, but the original is still there. Some traits may be more influential over time than others, some traits may be more easy to completely rewrite, but the core is still there and in many cases it echoes through the character’s life.


♃ 27.02 — Corbeau’s unsubstantiated theory #2: Cogs are programmed to be physically conservative on a very base level, intentionally. In about the year 50 or so, maybe 60-70 years before the silent war truly began, a lot of stuff happened at Marsco. Three corporations were spun off in a very short period of time (Pulse, ASR, Genotype). Marsco was likely dominated by humans at the time (it was a human corporation after all.) In a tight cluster around this time, a few major events occurred: Marsco’s guiding AI SenTri/Sentry went offline for a time, likely around 50-60 AE. Well, it either went offline or went into hiding. ASR was able to surprise Sol with the launch of Cogs…at least that’s the impression we have from the biased narrator of HSD1.0. Pulse launched and then scuttled a “social unification project.” Maybe Genotype launched the initiative to purify the rat race and consolidated itself as a single-species corporation, and created a secret genetic archive on Phobos.

My theory here is that there was an explosion of corporate liberty when the lights were temporarily shut off at MarsCo. ASR, the only corporation that appears to have been intentionally spun off…and the first of the three breakaway corporations…breaks away from MarsCo and uses its most powerful tools (it’s own AI, which may or may not be the true face of SenTri) to launch a crippling strike against MarsCo’s information technology and finances. MarsCo’s lights go off for 10 or 20 years, and much of its power is distributed to the Big Three Spinoffs. Gradually, its lights are restored, but as a housekeeper instead of a control rod: remember, Sentri’s original purpose was specifically to control the growth rate of Vector civilization (see Sound and Silence, Shadow Presidents).

Getting to Cogs: each of the Big Three had its own projects during this time that grew to define them. ASR’s was the development of the Cog. Genotype’s was likely preserving and then consolidating under the Rat species. Pulse’s was some sort of “social unification through sports” (I’m calling it Project Limitless): the core philosophy was “vectors can be anything through genetics, their strength is their flexibility.”

Cogs are unusually rigid. They don’t change their bodies much. They don’t want to be tools, which throws away a lot of their potential talents. Why? My theory is that they were created to merge with Vectors, not compete with them, and knowing Pulse’s vision for society, ASR intentionally muted the Cogs’ desire to physically improve and change themselves. That’s for Vectors, Cogs get all this other cool stuff.

♃ 27.02 — Cogs and teenage rebellion — the text suggests that most major structural changes are made by a cog deciding who s/he is occur by age 6-8 or so, and after that it’s fine tuning. It feels like serious rebuilds are a cultural taboo, as deep as a sexual hangup or a disgust reflex.


♃ 42.07 — It’s hard to make a “scarcity based on cost” argument for/against custom cog chassis. We don’t really know if there’s a market for art-chassis, it seems like there aren’t, but the main experience we have of cogs is in ASR contexts, and outside of that, we don’t really know what they are. Pulse cogs may be way out there. The “be all you can be” competitiveness of Pulse could clash with the ASR desire to NOT be all you can be…physically…vs. the ability to shape yourself to be whatever you can be. Hard to say.


♃ 44.57 — it occurs to me that the only religious character we meet in all of HSD canon is a dying cog wearing a religious symbol in the color text of Extended.


♃ 44.57 — Off microphone we’ve had a few conversations about licensing of creative product, particularly cog chassis. It seems like ASR would have a strong interest in not allowing people to make ongoing licensing revenue off the bodies of their biggest customer base, but not all chassis are made by ASR, so that’s an open question.


♃ 46.05 — Aaaaand here’s where the audio breaks down, our local recording software runs out of memory and we’re left with just the audio Skype captured 🙁 Sorry, all! I’ll be a little more detailed with notes from here after


♃ 46.32 — if you CAN repossess a cog body, it seems likely that you wouldn’t be able to do it when someone’s still in that body…Corbeau likes the idea of putting them in a loaner body, specifically the K9 unit from Dr Who. Ashtaar notes the “owned” background in 2.0 fits that mold.


♃ 47.45 — Designer bodies and custom chassis may be more available in the elite super-rich world. Or not? HSD seems to be written for the 10 percent, but not the 1%, of society’s wealthiest…


♃ 48.30 — Used/hereditary Chassis? Corbeau doesn’t like the idea because of the new-new-new nature of Sol commerce. Whines thinks it’s a fun idea.


♃ 49.31 — Mechanics for a lateral? Most of us are in agreement that just whitewashing the mechanics and moving on is the best approach, HSD at heart is more a rules-light style of game. Whines suggests that since “lateral” and “cog” are both zero-sum builds (assuming HSD is points-balanced, which isn’t really a valid assumption, it’s got a lot of “Gentleman’s Game” ideas) you should be able to simply add the two together without a character point cost/deficit. Corbeau is uncertain: restriction and limiting options/allowing options is its own advantage, and picking from two sets is powerful.


♃ 53.13 — Similarly, some surgeries were built for vectors, like Shapechanging. Is it more in game-balance to give Cogs access to that surgery, or to restrict it?


♃ 54.56 — News articles this week: the “sea monster” Sollasina cthulhu, Growing Grapes on Mars, and the New York Times waxes extremely poetic on the recent photo of a black hole. And Flayrah talks about Elon Musk’s “furry curiosity” bit. Tech Times article on fish fossils, iridum, and the asteroid that may have killed the dinosaurs.